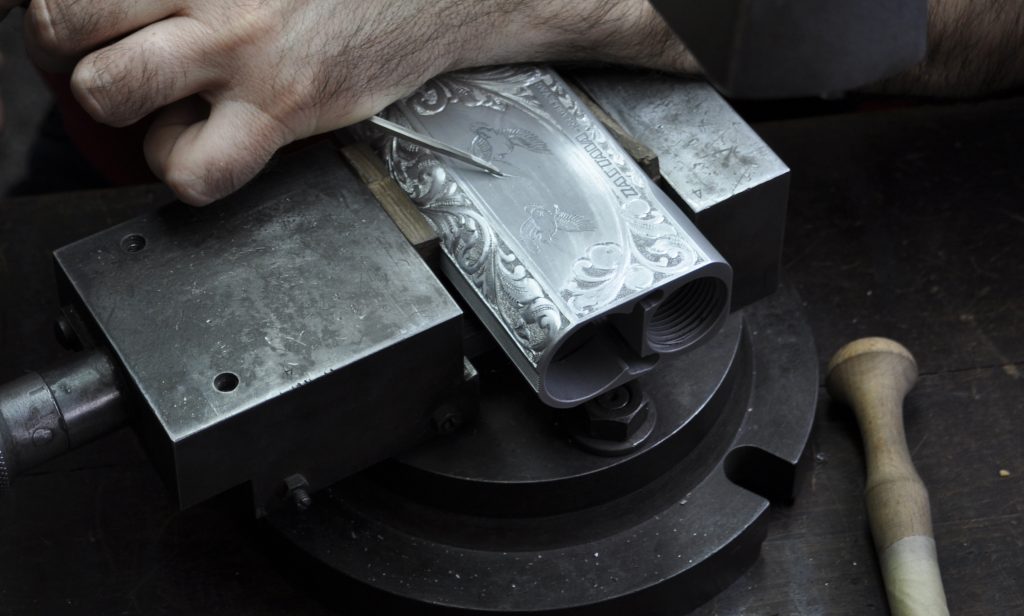 During the 1960s, Zastava oruzje AD already had its first weapon engraver, when that work was done by craftsman Milos Okiljevic. After him, engravings on the weapons in the factory were done only by a Sloveian, Zdenko Perhinek. He mainly used photo chemical method, and very little hand engraving. Zastava oruzje AD offered luxury, engraved versions of pistols to customers in the 1980s for the first time.

In 1977, Factory selected five gunsmiths with talent for art (Zdenko Perhinek, Radivoje Lazic, Dragomir Milojkovic, Novica Prokic and Ranko Babic) and sent them to one of the oldest European centers – Suhl – for training in hand-engraving. The craftsmen quickly mastered German style, and the application of arabesque and hunting engravings, and they also started development of the autochthonous arabesque, with a number of elements from national folklore.

Hunting and sporting weapons, rifles, personal use pistols and other weapons with the “signature” of the engravers from the factory are owned by famous world statesmen, ambassadors, artists, politicians, actors, athletes, famous collectors from the Middle East and Russia to London and America. Combination of precious metal with steel is used for relief pictures, most often motifs from hunting.

The craftsmen of engraving trained the next generation of gifted Zastava’s craftsmen, using the method they learned from the Germans. They then made artwork-based engravings on metal and carvings on wooden parts of weapons after special orders. Precious metals gold and silver are often inlaid in metal parts of weapons, which, besides artistic impression, significantly increase the value of the weapon. One engraver does all the engraving and carving on a complete weapon (metal and wood).